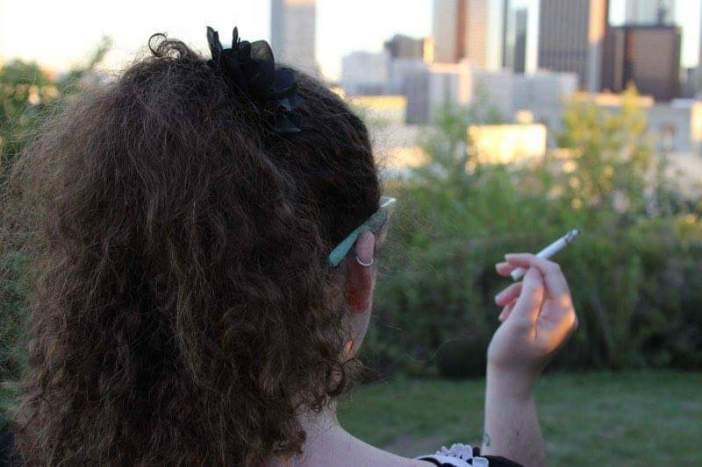 When I first began writing, I was a kid. I wrote short stories just for fun and saved them to my floppy disk. I recently found a story I wrote when I was five. It depicted a day where it rained pennies. I thought to myself: Why pennies? Why not quarters or hundred dollar bills? I think in first grade my teacher read one of my stories aloud to the class. In junior high I thought it was “uncool” to write, so I began writing music instead. ln high school, I reconnected with writing and began my first novel.

So, I guess my writing has aged much like a body would. Wiser, but more concerned with aesthetic.

2 Your poems are constructed using a myriad of forms and tropes such as strikethrough, parentheses, and spacing in between letters. What poets have influenced this aspect of your work, and how do you tend to employ it?

Hm, that’s a good question. I just get bored with one certain aesthetic and have to change it up. It’s like an itching in me to try something new. My mind starts to pace and it won’t settle unless I feel there’s some kind of evolution taking place. E. E. Cummings was a huge influence for me in that regard. It’s actually funny. In school, I was really antiform in poetry. I hated form with all of my guts. But, in hating form, my lack of form became a form? A lot of peers that reviewed my work in workshop called me a “form” poet and I was like…wait…WHAT. It’s funny to me now. A lot of things are.

3 You write a variety of both poems and short stories. How does your writing process differ between the two, and do you have a preference for one or the other?

AH! haha that is a great question. I don’t have a preference. I tend to use both formats in their own way. When I’m aiming for raw and honest, I write a poem. When I’m aiming to unleash feelings or ideas I find wouldn’t fit well with a poem, I tend to bury them in a story. Stories, to me, are a way of elongating and exploring a certain feeling or emotion that I don’t feel comfortable doing with a poem. I love to get lost in worlds, which I find I can’t really do with a poem. When working on a novel, I look up after hours of writing and feel like I really just escaped to this place only I have the key to enter. It’s an incredible experience I can’t quite describe.

Sometimes, I confuse myself. I don’t know whether or not what I’m writing is a poem or a story. Often, I find people tend to see my poetry as narrative poetry and my prose as poetic prose. So maybe it all just blends together.

Yes, I do. Before I wrote poetry I used to be a really quiet person. I never spoke. I had a lot of thoughts and opinions, but I never voiced them. I always felt they weren’t well-formed opinions or convinced myself they didn’t matter. Once the poems started flowing, I became a lot louder. I made a lot of friends, and the conversations I’ve been apart of with creative people on curbsides, in parking lots, and on random front porches are some memories I value most.

I’d like to be an editor for a publishing company. I love the process of creating, and I’ve done a lot of freelance editing as well as working for some presses in the past. I’ve edited manuscripts of poetry, fiction, and creative nonfiction.

Well, my mother was definitely a huge influence when I was a kid. She was a Literature teacher and definitely encouraged creativity. We used to get prizes for reading books. One summer, I read 60 books and I got a gameboy. My siblings were mad because I was the youngest and they said the books were “easy”. (The books were written for a demographic three grades ahead of me though, it was totally fair! Ahem, we still debate about this.)

Also, a friend of mine in high school (I won’t call him out, but he is a Paper Plane Pilot) used to lend me novels. We used to sit in the back of our chemistry honors class and talk about philosophy, the beats, art, film, you name it. I ended up failing the class and having to take summer school.

Well, there were things I never really paid much attention to when growing up until I started writing. For instance, my spinal surgery, Lebanese-American identity (or lack of haha). It has also helped me get through some other hard times as an adult that I think would have been really difficult to get through if I wasn’t able to write out some kind of a conclusion or insight.

One question I do often ask myself after I’ve had a taxing day or am feeling emotionally overwhelmed by a situation is: What can you take from this?

This is tough. haha I want to answer this question, but it’s kind of personal and I don’t want to call this person out. (I’m a terrible poet if I still have a sense of “too personal”)

Though, I’d say, if it’s just a writer I admire and don’t know personally, I’d go with Aimee Bender. But then I’d probably end up freaking out and thinking my work was shit and go in the fetal position in the corner and stay there for a few days.

My vision for Paper Plane Pilots has changed dramatically over the years. At first, it was just an online workshop for some friends. Then we randomly gained followers, and lost the “workshop” vibe. We started In-flight Literary Magazine because I wanted the opportunity to publish people outside of the collective’s work. I also wanted it to be peer-reviewed, since Paper Plane Pilots isn’t (unless you include me editing every post.) My aim is to promote global empathy and bring writers from all over the world together to share in their common love for expression.

Honestly, I have no idea. My goal when I was younger (and naïve) was to be able to make a living on writing. Now I kind of just want to reach people. I want to connect with people and be able to discuss the art and more meaningful topics with great minds. I guess it’s just a good (and valuable) way of passing the time.

It can start with anything. I could be listening to a song and mishear a lyric, I could be driving on the freeway and my “inner voice” will say something that I feel starts a poem, I could be watching a TV show and think, man I thought this is where they would go with this, a certain experience I have, or maybe a true story I hear.

For instance, this is the idea I’ve had for a story for a while now:

I found out recently that I am a citizen of Lebanon by birth. I was born in Hollywood, but since my dad is a Lebanese native, apparently his children are also Lebanese citizens? Once I found that out, I came up with an idea for this short story (I won’t give too much away here, because I have yet to write it.)

I feel like that was a long tangent and I don’t know how to bring it back.

Hm. I do like a lot of silence. I’ve never been able to write with other people around (including classrooms and cafes.) Sometimes, I do write in my phone when I’m out. I think I have like 1,000 notes in my phone. I just pretend like I’m texting and I blend in. I get distracted really easily, though. So it helps if it’s a secluded, familiar place.

Usually I write it out and I end up hating the form and change the form. I don’t do too much editing on my work, which I’ve actually been trying to change. It’s not because I think it’s perfect, I’m just afraid of messing it up even more. haha If I don’t know where to go with a piece, I usually just send it to a friend and ask their opinion on it. (Which you’ve been the victim of a few times. haha [is it normal to say “haha” in an interview?])

One thing I will say is: I try to make my writing accessible to the reader whether through narrative, vernacular speech, or even just accessible language.

4 thoughts on “Interview with Holden Lyric, conducted by M. Alden”